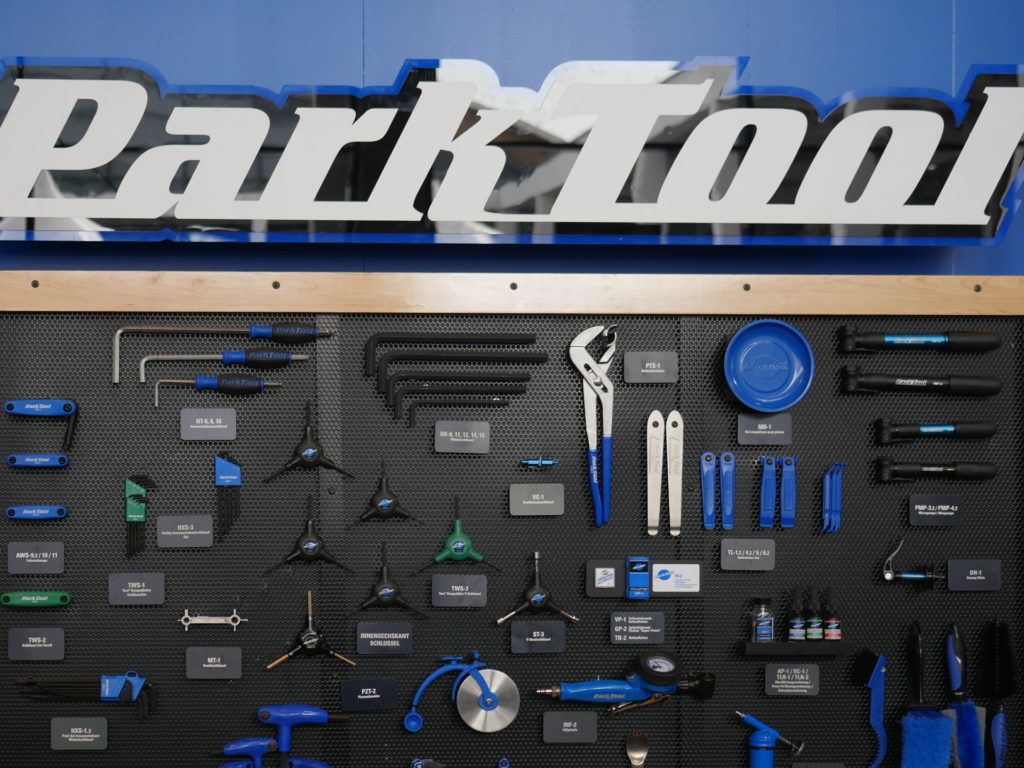 The right bike for every biker, the right tool for every part. When it comes to the maintenance, repair, or replacement of a bicycle part, it often fails because of the missing or inappropriate tool. The bicycle construct consists of a myriad of individual parts that come in different sizes and standards depending on the manufacturer and year of manufacture. Accordingly, there is also a huge number of special bicycle tools on the market. But most of the everyday repair work on the bike can be done with 2-3 Allen wrenches and the usual screwdrivers from the workshop. On the other hand, there are also many bicycle tools that can be used universally on (almost) any bicycle. That’s why this guide divides bike tools into three categories: Basic tools (from the household), bicycle tools (universally applicable), and special tools (only applicable for certain bicycle parts).

By “basic tool” we mean the kind of bicycle tools that are not actually bicycle tools at all. By this, we mean the “common” assortment of tools that in many cases you have at home or in the workshop anyway. With these tools, you can already get where you want to go on your bike in a great many cases. Many hobby tinkerers often refer to these basic tools as absolute basic equipment that you should absolutely have if you use the bike often.

There are numerous other tools from the hardware store, with which you can help yourself in very many cases on the bike. These are rather solutions for specialists and hobby mechanics who already have experience with such improvisational methods.

We’ll refer to our second category simply as “bike tools.” This includes the kind of tools that you only need on your bike (as opposed to the basic household tool). However, we would not yet call these tools directly special tools, because there are a lot of bicycle tools that can be used on all (or almost all) bicycles and are also used very often. These tools are therefore often still counted as basic tools or basic equipment of any bicycle workshop.

Please note that some of the above tools are not fully compatible with all bikes (nipple clamps, for example). Some tools are also simply superfluous on some newer bikes: a tubeless tire does not need a tire patch kit (at least not in the conventional sense) and for a bike with belt drive, you do not need a chain tool. But these are exceptional cases.

Many of the above tools (except the assembly stand, of course) are also usually found in bicycle tool cases that contain the basic equipment for tinkering with your bike (many of the tools in the basic tools category are usually included as well, such as Allen wrenches of all common sizes and Phillips and slotted screwdrivers).

As the third and last category, you will find all the “special tools” that you only need under certain circumstances or that must be precisely adapted to the bike. This is by far the largest category – if you really want to get closer to your bike, you need a lot of special, customized tools. In return, the use of these tools is sometimes a bit more complicated as well, so if you’re a layman, it might be more worthwhile to take your bike to a mechanic. Don’t let that discourage you, though: We definitely recommend that you first read up on the tool and the instructions that go with it before making your judgment.

Which Bicycle Tool Is For On The Road?

So much for the complete equipment of a bicycle workshop. But the breakdowns do not occur in the bicycle workshop (unless you have a “mechanic’s accident”), but on the road. So if you don’t want to push your bike home, it makes a lot of sense to have your bike repair shop with you on the road. Which bike tool is best to always have with you? The handy bicycle multitool is practically designed to be always with you. It contains almost all the tools you need most of the time and fits in most bags. But some people don’t want to spend money on such gadgets. That’s why we list here again what you should have with you on the road (although a multitool also fulfills many of these functions).

Anyone who has paid attention will notice: All these tools fit, for example, also in the bag under the bicycle saddle (without having to buy a multitool) – with the exception of the bicycle pump, but you can also attach it to the frame with a suitable frame holder. So you do not even need a backpack to have the most necessary tools always with you.

The above list represents our personal recommendation. Some will cry out in protest when reading, “But there is still missing the spoke wrench/valve adapter / spare shift cable!” or similar. Who wants to play it safe, of course, can still take all sorts of additional tools – the only real limitation is the size of the frame or saddlebag.

Inflate Bike Tire – How to Inflate your Bicycle Tires

Inflate Bike Tire – How to Inflate your Bicycle Tires