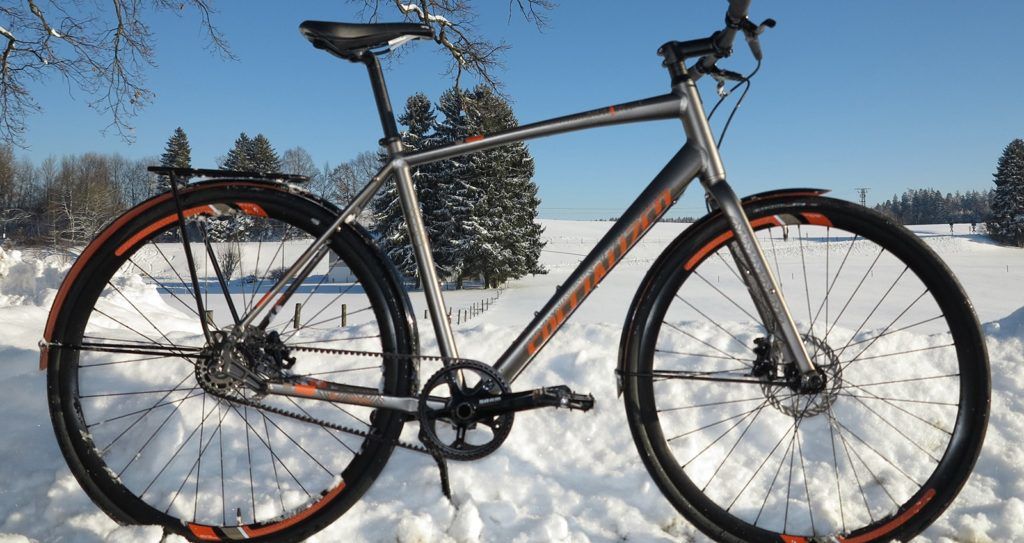 The mystical bicycle without a chain, which you can catch a glimpse of recently in the bicycle store – can it be true? Indeed. It’s the latest craze in e-bikes and trekking bikes and can now also be found on new bikes in the medium price range. Frank Schneider, a former downhill pro who now works for the belt manufacturer Gates, postulated back in 2016: If the belt drive were approved by the UCI for top-level sport, it would break records. Admittedly, it takes quite a bit of courage to put forward such a thesis! And it does paint quite a coherent picture. The belt drive – a hot new discovery that would completely turn cycling upside down if the UCI allowed it. Unbelievable! Hype, records, bans, controversy – there has rarely been so much drama for a new bike part.

Find out what’s really behind the hype about belt drives here.

What’s Different About The Belt Drive?

In the course of this article, we’ll examine one hype hypothesis after another to uncover what’s really behind the belt drive. But first, we’ll give a summary of what the belt drive is, how it works, and what makes it different from the chain drive.

How Does A Belt Drive Work?

It’s the same principle as the chain drive. Instead of a chain, you have a belt with wedge-like teeth, and instead of a sprocket, you have pulleys. The teeth of the belt engage in the teeth of the pulley – while in the chain the teeth of the sprocket engage in the recesses of the chain links. As a result, less interlocking takes place in the belt. Therefore, the belt size must be precisely matched to the bike and have a certain tension, which is called preload. Next, let’s enumerate all the differences from derailleur in detail again.

Belt Instead Of Chain

First, the obvious: The belt drive, or belt drive, uses a belt instead of the traditional bicycle chain, like the ones used on some motorcycles. The bicycle belt is a belt that consists of six carbon strands. With that, we’ve already checked off the most important box needed to make a hype-worthy bike part: the almighty and efficient carbon.

Pulley Instead Of Chainrings

And instead of the typical chainrings, the belt drive uses so-called pulleys. Namely, one such pulley is always found at the front and one at the rear. A belt drive with multiple pulleys would not be feasible at the moment – because the current belt is extremely rigid and inflexible. For the belt to work, it must always sit exactly straight. That alone creates a problem in frame manufacturing since the frame must also be exactly straight.

Accordingly, the possibility of a derailleur (or a theoretical belt shift with multiple pulleys) is already eliminated. This means that belt shifting always has to switch to hub shifting or geared shifting – whereby geared shifting is also a fairly new component. Here, the gear train is located in the crank of the bicycle. These gears have their own advantages over derailleur gears, but for good reason, they are only found on certain genres of the bicycle. Probably the two biggest disadvantages: they weigh considerably more than a derailleur and don’t have as much deployment potential.

Of course, you can theoretically ride a belt-drive fixie without gears.

Headaches With The Bike Frame

The only solution: you cut up the bike frame. This is no joke. The belt requires a special bike frame where the right saddle brace can be opened. This means that even you, as a cyclist, can use a suitable wrench to open the frame to replace the belt.

The Bottom Line – This Is How Much The Belt Drive Costs

But it’s not just the manufacturing of the frame that costs extra – the belt drive itself is also a lot more expensive than a chain drive. With everything included, a belt bike of the same quality costs at least 200€ more than a chain bike. That is already sobering – but maybe the belt drive keeps what it promises? Let’s now deal with the hype of the belt drive.

The Belt Drive Is Resilient And Low-Maintenance

The big advantage, which is probably universally recognized: The belt drive is particularly low-maintenance and lasts longer. The belt is said to last twice as long as the chain – up to 20,000 km. And it causes the driverless headaches than the chain ever does. The belt runs without oil and does not need to be retightened. Dirt hardly sticks and if it does, the belt can be easily washed out with water. Especially in winter weather, rain, snow, and mud, the belt drive stands out. Therefore, the belt drive also proves itself on e-bikes that travel longer distances.

At least, that’s what the marketing says. And indeed, resilience, durability, and freedom from maintenance are the strongest points of the belt, as they can be established without a doubt. That’s why people try to exploit this one point as much as possible. However, we question whether the belt really makes a bike more winterized, as the marketing suggests. After all, a conventional chain bike also works in winter and rain. It is doubtful whether the belt drive works better in bad weather than a chain drive does. There is just less dirt sticking to the belt. In the end, it just means that the belt will last longer than the chain. And that’s what we hope – we pay a lot extra for the belt.

This is a point that is even hinted at in relevant bicycle magazines. In tables, they soberly list the facts of the belt drive versus the chain drive. And indeed! A belt drive weighs a good 100 grams less than a chain drive. But what only stands out when you scan through the whole article is the fact that the belt drive only works with hub or gear shifting (or without shifting). These types of gears weigh significantly more than the tried-and-true derailleur and therefore hardly ever find their way into the pro scene. A hub or gear shifting brings 1,000 or 2,000 grams more on the scales, in order to ensure at all a comparable transmission range and lags the derailleur ultimately nevertheless far behind, in terms of transmission and power efficiency. So the belt drive only weighs less if you compare it to a derailleur bike with a hub or gears. Or else if you try to sell a fixie with a belt.

Now we come to the absolute point of contention at all – the belt drive is more efficient than the chain. To this point already on the sides of the belt manufacturers and belt proponents (by other authors also called the “belt lobby”) different statements are found. Sometimes there are small concessions, for example, that the belt is almost as good as the chain in terms of power conversion efficiency. Elsewhere, however, people bravely argue that the belt outperforms the chain. The most blatant statement is probably the one we mentioned in the introduction: The belt would break records if the UCI allowed it in track cycling. This thesis comes from someone who happens to work for a belt manufacturer.

The Arguments In Favor Of The Belt

There are different arguments here. The belt would have less internal friction than the chain. Or the belt works better under high load than the chain because the chain loses efficiency through wear. So, in the end, you go back to safe ground – after all, the belt lasts longer than the chain. But that is total nonsense to apply this fact of longevity to efficiency in driving. Chain wear is not something that occurs while driving per se. Wear occurs over several thousand kilometers without chain maintenance. The load capacity of the belt cannot be transferred to the driving experience.

And what’s more, it turns out that even a rusty chain at the end of its service life works better than a factory-fresh belt. Several tests came to this or similar results.

“The belt drive as a ‘system’ is always less efficient than a chain drive with the necessary pretension, regardless of rider performance.”

The fact is that the belt swallows power. According to the findings of rad-lager.de, you lose about 3 hours with the belt over 1,000 km at comparable power. However, it is difficult to notice this as a rider – because this corresponds to an incline of 0.5%. Besides, if you get a new bike with a belt, it will still perform better than the old bike because of the better, newer, and unused parts. So the performance case of the belts is compensated in this way without you noticing it as a rider.

UPDATE: Now also statement from Prof. Dr.-Ing. Hubert Hinzen of the University of Trier: “Measurements have shown beyond doubt that the losses of a timing belt drive are significantly greater than those of a chain drive.”

Where Does The Power Loss Come from?

Why is the belt worse? What is factually clear: The belt has a high preload. What does this mean? Wikipedia states:

“Pretension is a mechanical stress present in components without external load that is introduced during production or assembly to achieve the desired behavior under load.”

Basically, it means that the belt needs a certain amount of tension to sit securely on the pulleys and make the system work. This tension is higher than with a chain because the chain “meshes” more with the sprockets than the belt does with the pulleys. The belt must sit tight and taut – unlike the chain, which sits loose and loosely in comparison. If you express this force in kilograms, the preload of the belt is 40 kg – while the preload of a chain is 2 kg. When you pedal, the pedaling force adds to the preload. The mechanical friction increases linearly with the total force – i.e. pedaling force and pretension. Even if the belt had lower internal friction when pedaling (which has not been proven), the belt cannot compensate for the higher preload. And the tests show: Even at high pedaling force, the belt lags behind the chain.

Short answer: No one really needs the belt drive. Despite all the hype and really bold press statements, the promised revolutionary advantages of the belt drive have yet to materialize. The belt drive is probably most suitable for e-bikes. After all, the conversion of pedal power into drive plays a subordinate role there and you cover greater distances – if you really always ride your e-bike to work. And the increased costs weigh less in this price range.

The following applies to the conventional bike: Just because the belt lasts twice as long doesn’t mean it pays for itself! After all, the belt costs a good three times as much as the chain and requires a special, more expensive frame. You could buy a bike with consistently better components for the same price. Even more so, the tests show that the belt simply rides worse than the chain because of the increased preload and resulting friction.